From A Cold To Cancer – My Cancer Discovery

Discovering you have cancer is one of the worst experiences in one’s life. There is no doubt that it instantly changes your life as it did mine. I went from experiencing allergy symptoms to cancer in a matter of months.

In September of 2020 during the covid pandemic I began to have to have a minor cough along with some other allergy symptoms which was normal for me but as the winter season came on, I began to feel worse. I thought I was coming down with a cold that I couldn’t shake off.

The end of December and entering 2021 I began to have occasional low fevers, which prompted me to want to see a doctor because I thought I had and infection, the doctor agreed, and I was given some antibiotics. The coughing subsided for a few days but immediately began again.

Black Masses Were Found in My Lungs!

The next step was to get a chest x-ray and that’s when the worrying began. Once those x-rays came back, we discovered I had black masses all over my lungs and in the report, it said that cancer could not be ruled out, just seeing the word cancer in the report shocked me. It automatically took me down a mental road that caused so much anxiety, immediate thoughts of suffering entered my mind, thoughts that were so depressing it’s difficult to describe. I think the hardest part was having to share the news with my mother and having to say the word cancer out loud. At that moment the possibility of me having cancer existed although it wasn’t for more than a month later that it became known that I had Hodgkin’s Lymphoma.

My Trip To the Pulmonologist!

I was sent to a lung specialist who immediately had me hospitalized because I had already spent nearly two months with a low-grade fever. By the time that it was diagnosed that I had Hodgkin’s Lymphoma I spent two months with constant coughs, chills that lasted for thirty minutes or more and fevers that would come and go every day for two months. They ran a battery of test for a week, every test came back negative. It wasn’t until the lung biopsy was done, my first ever operation, that they were able to diagnose that it was Hodgkin’s Lymphoma.

I feel that I had the best pulmonologist ever. He didn’t just refer me to an oncologist. He picked up his cell phone and called an oncologist directly on his and scheduled my first visit the next day. I mean I had stage four Hodgkin’s Lymphoma, I could’ve been living with this for years with no signs of sickness.

Seriously, there had been no signs that I was sick, this cancer just waited until it was in full growth. I had been going to the gym and living life without experiencing any symptoms that came with Hodgkin’s Lymphoma. I didn’t have time to wait, I had to start treatment immediately and that’s exactly what they did. I started my first chemo treatment about three weeks later.

The Beginning of Chemo Treatment

In order to start treatment, I had to go through several other tests. I had to undergo a lung function test, a cardiogram, of course blood work and I had to have a port put in so they could administer my chemo cocktail. I was treated a program called ABVD treatment for Hodgkin’s Lymphoma.

This entire process was overwhelming not only because of the preparation that one must go through to start treatment but the mental preparation that I needed to prepare myself for which was the hardest part of it all. Our minds have this horrible ability to quickly steer itself to the negative. I couldn’t help but to imagine the worst outcome of all of this and I needed to find a way not to let myself become depressed and let myself have a negative outlook.

The fact is you can’t stop thinking about cancer, but I could control what I did every day and what I did was keep myself busy. I kept myself working, spending time with Ammie, my significant other, best friend and soon to be the person who most cares for me on an every day basis.

In April of 2021 my cancer treatment began. I invite you to continue following along through my journey, join me as we discover the difficulties of cancer and how we manage to make adjustments in our lives because once you think you have a hold on things in life it has a tendency of throwing more at you to make it even more difficult.

Next: My Caregiver Experience 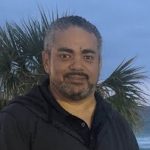 “Thank you for following my journey. If you have the means and wish to contribute to my program by becoming a ‘Jose’s Hero’ where $10 per month can really help us help others I invite you to review our progam. In the meantime, join our Today with José email updates below.”

Besides talking about my cancer journey, I want to share with you programs that I am working on that will help others in business, patients and caregivers with cancer and even young adult with education. I've realized that I need to #LIVELIFE different and really work on things that have more of an impact, so I invite you to join me on my journey.

I'm so excited that you have chosen to join me on my journey.